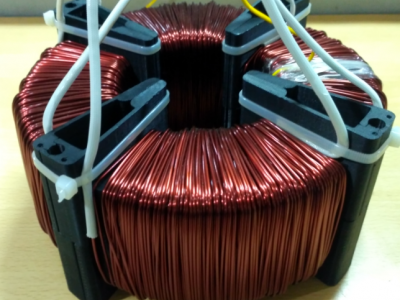 The core cap modules insulate windings from the core over the full range of the windings, and allow for double-wall insulation between adjacent windings, significantly reducing leakage current compared to conventional toroidal transformers. They also provide for direct cooling of the core by ambient or forced air without intervening insulation. The core cap may also be assembled from component modules over a completed wound toroidal core.

The segments of each module include a pair of spaced, typically electrically insulating, walls between which a core-covering panel portion is connected. The walls are disposed at a predetermined angle relative to each other, typically 30 degrees, 45 degrees, 60 degrees, or the like so that each modular segment spans an arc of about 30 degrees, 45 degrees, 60 degrees, etc. The respective spaced walls include engageable, typically male and female, connector portions, such that adjacently disposed segments may be repeatedly engaged with one another, with sufficient connected segment portions defining an annular core cap.

While identically sized and shaped modules are typically more convenient, there are no practical restrictions on the combinations of core cap module sizes and shapes that may be combined to yield a custom core cap having desired properties and characteristics.

Typically, the walls engage the panel to define a relatively flat or flush core-engaging side or surface (defining the bottom or underside of the segment and ring) and disposed opposite the barriers established by two joined or locked together walls (defining the wire-segmenting or top side of the ring). The barriers define the parameters between which alternating wire windings are restricted, typically alternating primary and secondary windings.

The segments include one or more separation or wall positioned to partially or completely extend across the topside of the panel to further define parameters between which wire windings are directed. The one or more separations are typically positioned equidistantly between the walls and/or each other, respectively. The separations are typically oriented to extend radially outwardly from the center of the core and/or the annulus defined by the joined segments; in other words, each respective separation typically lies on a radius of the annulus, although the separation walls may have other convenient shapes and contours as desired.

The walls are truncated and do not extend across the panels. In some of these, lower walls are positioned opposite the panel from the respective wall. The lower wall may likewise include matable connectors for co-joining. Some of the segments include ribs positioned on the upper side of the panels, so as to generate an air gap between wire windings and the topside of the ring. The production of an air gap facilitates air cooling of windings by allowing air to circulate between windings and the topside of the cap.

A winding tool is used to facilitate the winding of a capped core from a single bobbin. The winding tool is typically a flat ring having a projecting rim or flange extending from the outer diameter. The ring typically includes a slot, giving it a C-shape. The ring is sized to accept a segment, with the slot sized to pass wire onto the segment. The winding tool also typically includes an elongated arced wire lock member having multiple partial slots and one or more locking apertures for connecting the wire lock to one or more segments during the wire winding process

The respective covers are typically composed of adjacent cover panels when the segments are connected to define the ring.

Typically, a pair of cap rings are constructed from connected segments and positioned on opposite sides of a toroidal core with outward protrusions aligned. An even number of segments are connected to make each ring. Wire is wound contiguously around alternating segments to define the primary windings, with N windings per segment. Wire is wound contiguously around the remaining segments, in multiples of N windings per segment, to define the secondary windings. Typically, all of the windings may be accomplished from a single bobbin or shuttle in one contiguous bobbin winding operation, with wire guided from one segment to the next through the groove or gap between the two opposite core caps. The wire is typically cut or severed to isolate the primary windings from the secondary windings, and the wound core may then be wrapped in insulation to define a toroidal transformer. In some of the winding tool may be utilized to facilitate core winding. Coils so wound retain the advantages of toroidal transformers while enjoying the benefits of being lighter, Smaller, more efficient and quieter than E-I laminate cores. Cores so wound exhibit reduced interwinding leakage current when compared with standard wound toroidal transformer cores.

Typically, the primary windings will occupy the odd-numbered segments, starting with the first segment wound, and the secondary windings will occupy the even-numbered segments. Each ring may contain multiples of three segments, such as six, nine, or twelve, and the core may be wound with primary, secondary and tertiary (not shown) windings as above to yield a three-phase transformer. Alternatively, the ring may contain segments having different configurations

An insulating material, such as a MYLAR strip, may be positioned to cover the portion of the core exposed by the gap, or the core may be partially or completely wrapped in an insulating material prior to the positioning of the cap(s) thereupon. In other designs, walls are spaced and oriented relative each other to define an annulus but are not physically connected to each other. All leads are double insulated/sleeved & attached with cable ties.

If a segment core cap can be designed that meets safety agencies specifications for creepage and clearance, then manufacturing time is reduced because:

If a segment core cap can be designed that is made of repeatable sections that “snap-together”, then the cost to tool and assemble the caps would be less because:

If an inexpensive tool can be designed to hold the segment core cap in place during primary and secondary winding, then the manufacturing costs will be less as existing manufacturing equipment can be used.

If a segment core cap transformer can be designed that meets safety agencies specifications for creepage and clearance and allows airflow around the core and windings, then the temperature rise will be less because:

If a segment core cap can be designed that includes mounting holes, then the weight of the transformer will be less because:

Segment Cap transformers offer significant reduction in leakage current and heat rise in comparison to standard toroidal transformers. Heat exchange is comparatively better on segment cap transformer since the design of the caps itself bestow all necessary insulations in place. It has been found in our experiment transformer of simple schematic (1:1 isolation txmrs) pose an advantage of 13~17°C over temperature rise.

Segment core cap transformer construction itself lend for better heat dissipation so they can be rated for extended power for the same volume which is the primary advantage. So, they are relatively smaller in size and lighter in weight compared to transformer of standard method of construction for the same power levels. Less leakage current, less manufacturing cost and cost-effective mounting design are the other advantages.

For example, below is a comparison of the 1500 VA segment cap transformer (Extended power 1800 VA) to our standard 1800 VA medical transformer of standard method of toroidal construction 1800MD-1-003.

Although toroidal transformer designs are fairly mature in general, this white paper shows there is still room for innovation and improved efficiencies through the use of segmented core cap technology. We hope this piece of work is helpful for medical device manufacturers, magnetic designers, and anyone who may be interested.

For more information regarding segmented core cap technology or other medical grade magnetics from Talema, please contact us.