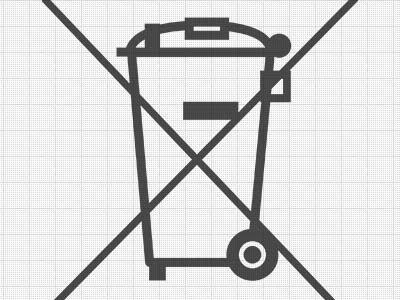 Waste from electrical and electronic equipment includes a large range of devices such as computers, refrigerators, mobile phones, etc. at the end of their life. This type of waste contains a complex mixture of materials, some of which are hazardous. These can cause major environmental and health problems if the discarded devices are not managed properly. In addition, modern electronics contain rare and expensive resources, which can be recycled and re-used if the waste is effectively managed.

Improving the collection, treatment, and recycling of electrical and electronic equipment (EEE) at the end of their life can:

WEEE is an acronym for Waste Electrical and Electronic Equipment (also widely known as e-waste). The amount of e-waste generated every year in the EU is increasing rapidly and is now one of the fastest-growing waste streams. EU rules on WEEE aim to contribute to sustainable production and consumption.

The EU WEEE Directive designates safe and responsible collection, recycling, and recovery procedures for all types of electronic waste. The directive also imposes the responsibility for the disposal of waste electrical and electronic equipment on the manufacturers or distributors of such equipment.

In April 2002, six WEEE producer responsibility organizations with operations in Austria, Belgium, the Netherlands, Norway, Sweden, and Switzerland founded the WEEE Forum. All organizations are open, non-profit-oriented compliance schemes run on behalf of producers or producer associations. The WEEE Forum is the world’s largest multi-national center of competence as regards operational know-how concerning the management of waste electrical and electronic equipment.

How WEEE Fits with Other EU Directives

Three directives currently regulate the way electrical and electronic goods are designed, manufactured, and disposed of at the end of their useful life. These are Ecodesign, RoHS, and WEEE. Ecodesign deals with the reduction in energy consumption, RoHS deals with the removal of hazardous substances, and WEEE deals with the disposal of waste.

RoHS regulates the hazardous substances used in the manufacture of EEE and supports the WEEE directive by reducing the amount of hazardous chemicals used in production. The WEEE directive regulates the disposal of this same equipment and how products are managed at the end of their lifecycle (EoL) and encourages recycling and reuse in accordance with EU Directive 2012/19/EC.

Many factors contribute to the generation of E-waste, such as the continuous innovation of technology, consumer upgrades, lifestyle changes, and the end of intended usage of products. E-waste is the most rapidly growing waste problem in the world. Computer devices account for nearly 70% of annual e-waste, 12% comes from the telecom sector, 8% from medical equipment, and 7% from electric equipment. 20 to 50 million metric tons of e-waste are disposed of worldwide every year. This is equivalent to throwing out 1,000 laptops every single second. China, with 10.1 million tonnes, was the biggest contributor to e-waste, and the United States was second with 6.9 million tonnes. India, with 3.2 million tonnes, was third. Together these three countries accounted for nearly 38% of the world’s e-waste last year 2020.

Europe is the second-largest generator of e-waste per inhabitant with an average of 16.6 kg/inh; however, Europe also has the highest collection rate (35%). The Americas generate 11.6 kg/inh and collect only 17% of the e-waste generated in the countries, which is comparable to the collection rate in Asia (15%).

According to the World Health Organization (WHO), electronic waste contains toxic materials that can leach into the environment and are dangerous to human health. Direct contact with toxic materials extracted from e-waste can expose workers to high levels of lead, mercury, cadmium, ar senic, polybrominated flame retardants, barium, and lithium. Such exposure can lead to irreversible health effects, including cancers, miscarriages, neurological damage, and diminished IQs. Other negative health effects of these toxins on humans include brain, heart, liver, kidney, and skeletal system damage.

The Six Categories of WEEE

Timeline of implementation of the European WEEE Directives

The WEEE Directive is one of many ways in which the EU is addressing the growing problem of e-waste management. The WEEE Directive regulates how these products are managed at the end of their lifecycle and encourages recycling and reuse. Our next article will cover compliance requirements for producers of EEE in greater detail.