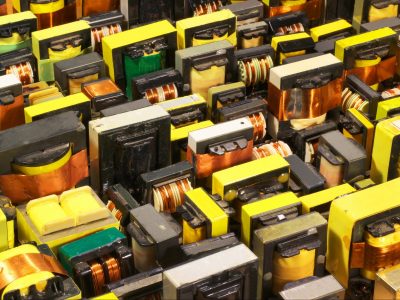 A transformer basically is a very simple static (or stationary) electromagnetic device that works on the principle of Faraday’s law of induction by converting electrical energy from one value to another.

A transformer does this by linking together two or more electrical circuits using a common oscillating magnetic circuit which is produced by the transformer’s core. A transformer operates on the principle of electromagnetic induction in the form of mutual induction.

Mutual induction is the process by which a coil of wire magnetically induces a voltage into another coil located in close proximity to it. Therefore, we can say that transformers work in the “magnetic domain” and transformers get their name from the fact that they “transform” one voltage or current level into another.

Transformers are important building blocks in the electrical network for the transmission and distribution of power. Stepping up and down AC voltages to any level is possible with the transformer thanks to Faraday’s law of magnetic induction.

Generated AC voltages are easily transformed into much higher voltages using step-up transformers and then distributed across vast distances using a grid of pylons and cables. The reason for transforming the voltage to a much higher level is that higher distribution voltages imply lower copper losses (I² × R) along the networked grid of cables.

The higher AC transmission voltage is then reduced to a much lower, safer, and usable voltage at its destination, where it can be used to supply electrical equipment in our homes and workplaces.

A transformer is a static electrical device that transfers electrical energy (AC) from one circuit to another circuit without a change in its frequency. Commonly, transformers are used to increase or decrease the voltages of alternating current in electric power applications.

These two coils are not in electrical contact with each other but are instead wrapped around a common closed magnetic iron circuit called the core. The two coil windings are magnetically linked through the common core allowing electrical power to be transferred from one coil to the other. This soft iron core is not solid but made up of individual laminations assembled together to form the core structure.

For most transformers designed for use within homes or offices, one of two styles of transformers is used. They can be made with either an E-I laminate or a toroidal core.

In an E-I structure, the matching “E” and “I” components are stamped from sheets of thin grain-oriented electrical steel that are later stacked to create the core. The primary and secondary windings are wound on bobbins. Multiple bobbins are placed on spindles and spun in order to apply the windings.

This method of using bobbins allows for automation that reduces the manufacturing times and also provides insulation between the windings and the core. The E-I core laminations are stacked inside the bobbins to complete the transformer. Their ease of construction makes standard E-I transformers very economical to manufacture, which is their primary advantage.

Although economical to manufacture, standard E-I transformers do have several limitations. As the punched laminations are stacked to form the core structure, small imperfections and burrs in the butting edges of laminations create an effective “air gap” which reduces the operating flux levels. Decoupling of windings is more common with linear construction, and as a result, leakage inductance and stray capacitance are naturally higher. Additionally, the loose laminations will vibrate at the fundamental frequency, which introduces disturbing hum (mechanical noise). All these disadvantages result in a transformer of larger size with less efficiency.

Our modern world of efficient power distribution across cities and continents would not be possible without electrical transformers. Standard E-I construction provides an economical solution that meets many power conversion needs, but they are not without their disadvantages in terms of size, weight, and efficiency.

Performance
Save & Accept
Powered by CookieYes