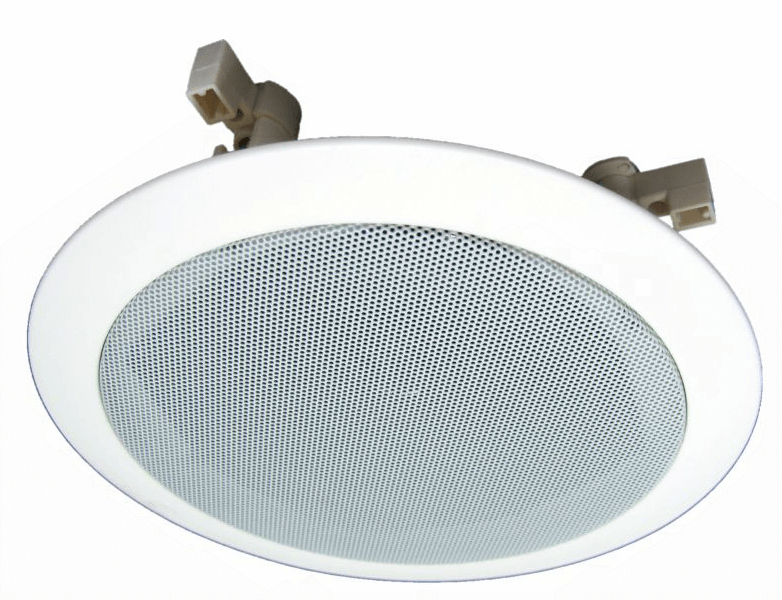 In this two-part discussion, we will focus on line-matching transformers and how they enable efficient distribution of audio over large areas with multiple loudspeakers.

We will begin by going over one of the main applications for line-matching transformers: constant voltage speaker systems.

The most common use of a line-matching transformer is in public address systems typically used in large buildings such as shopping centres, hotels, and large warehouses, to make announcements or play background music.

In this application, the same piece of music or the same announcement must be distributed from one source to many loudspeakers and does not need to be of very high quality.

A very common system for this type of application is known as a constant voltage speaker system.

Imagine a system with several loudspeakers connection to the same amplifier. If we put loudspeakers in series, we must add the impedances together.

If we take the same loudspeakers and connect them all in parallel, we get 8/4 = 2 Ω.

Naturally, it is possible to use many combinations of speakers in series and parallel to equate to the amplifier rated impedance, but imagine a large shopping centre, with a few hundred loudspeakers for the PA system. It is near impossible to wire all those loudspeakers in such a way that the amplifier sees the correct rated impedance and can deliver its rated output.

An obvious method of simplifying the system would be to connect all the loudspeakers in parallel, irrespective of how many speakers are involved. This is where constant voltage speaker systems come in.

The common standardized voltages used are 25 V, 70 V, and 100 V. 70 V actually refers to 70.7 V but is commonly known in the industry as 70 V. Although 100 V is common throughout Europe, it is not so common in the USA because if a 100 V speaker system is installed in a commercial building in the USA, then the speaker wiring must be Class 1 and it must also be installed inside a conduit. This would obviously add significant expense. Although rare, 100 V systems are sometimes found in the USA where high powered speakers and very long wiring are needed.

Basic electrics tells us that power is a product of voltage and current, so for the same amount of energy/power, the current is inversely proportional to the voltage.

For example, let’s assume we want to supply 200 watts of power from the amplifier to an 8 ohm loudspeaker.

If we supply the same 200 Watts into a 100V line, the current becomes:

Now, consider the cable which connects the amplifier to the loudspeakers: The losses depend on cable resistance, Rc: Losses = I2Rc

Hence for cables of equal resistance the losses for direct connection would be over 6 times the losses using a 100 V line distribution system.

The same logic would suggest we would achieve even lower losses by using higher voltage and lower current, but it was accepted historically that 100 V was a reasonable compromise between safety and performance. Higher voltage would be more dangerous!

Constant voltage speaker systems allow for the wide distribution of audio signals without the losses associated with direct connection. Line-matching transformers are a key component of these systems, and we will cover important transformer design considerations in part two of this discussion.